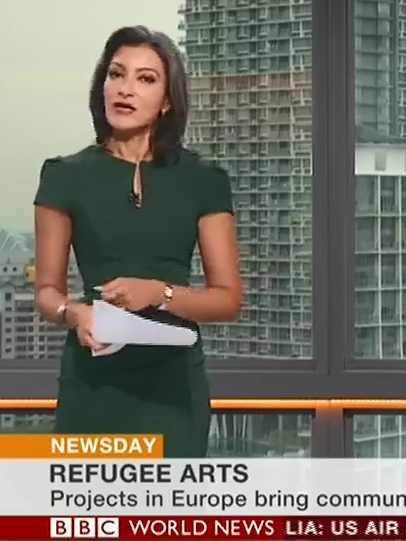 BBC World News Presenter 0:00
The increase in refugee and migrant populations around the world has given rise to anti migrant sentiments and questions over how we can all live together. Well, could part of the answer be as simple as investing in the arts? In a report compiled by the Istanbul foundation for Culture and Arts in Turkey, which itself is housing millions of Syrian refugees believes it might. One of its authors is Feyzi Baban. He joined me earlier from Istanbul.

Feyzi Baban 0:28
Myself, my colleague Kim Rygiel, we’ve been conducting this research in various European countries to look at the different citizens initiatives to use arts and culture to bring newcomers into local communities and break the boundaries between local populations and the newcomers. There are actually quite alot of interesting cases all around Europe, from Denmark to Germany and Turkey included, where local populations and refugees actually come together on various projects at different cities and neighbourhoods, to understand each other much better.

BBC World News Presenter 1:05
And tell us a little bit about these projects. Because we know art encompasses a lot of different things that painting etc. So what activities particularly work?

Feyzi Baban 1:15
I’ll give you some examples by for instance, in Denmark, which the Copenhagen municipales port it’s called 100% foreign a Danish artists in cooperation with the refugees that they had big over hundreds, big billboards around the city, where the refugees and their stories were juxtaposed all over the city. It allowed the locals of Copenhagen to constantly see these refugees and learn their experience the museum’s of Germany, for instance, they regularly incorporate refugee experiences. In one project for instance, in Berlin, it’s called multicar allows refugees to act as museum guides, where the refugees actually reinterpret the museum artefacts and the story is in the perspective of refugees.

BBC World News Presenter 2:07
It is interesting you talk about these experiences in museums in Germany, but we have seen in in places like Germany, particularly anti migrant campaigns marches in the streets. So how do you use art to work against something like that this very extremist thought?

Feyzi Baban 2:23
I think what happens is that in most cases, that the people they have these anti refugee sentiments when they don’t know anything about the refugees, their stories, that they come from this the arts actually bring out the refugees as who they are, and breaks down this bond without seeing the refugees is one big, abstract group of people, all of a sudden you actually start seeing them as individuals with their stories. I mean, obviously, not everybody’s going to, you know, go in that direction. But I think what the specific projects does that it helps people to understand who the refugees are. 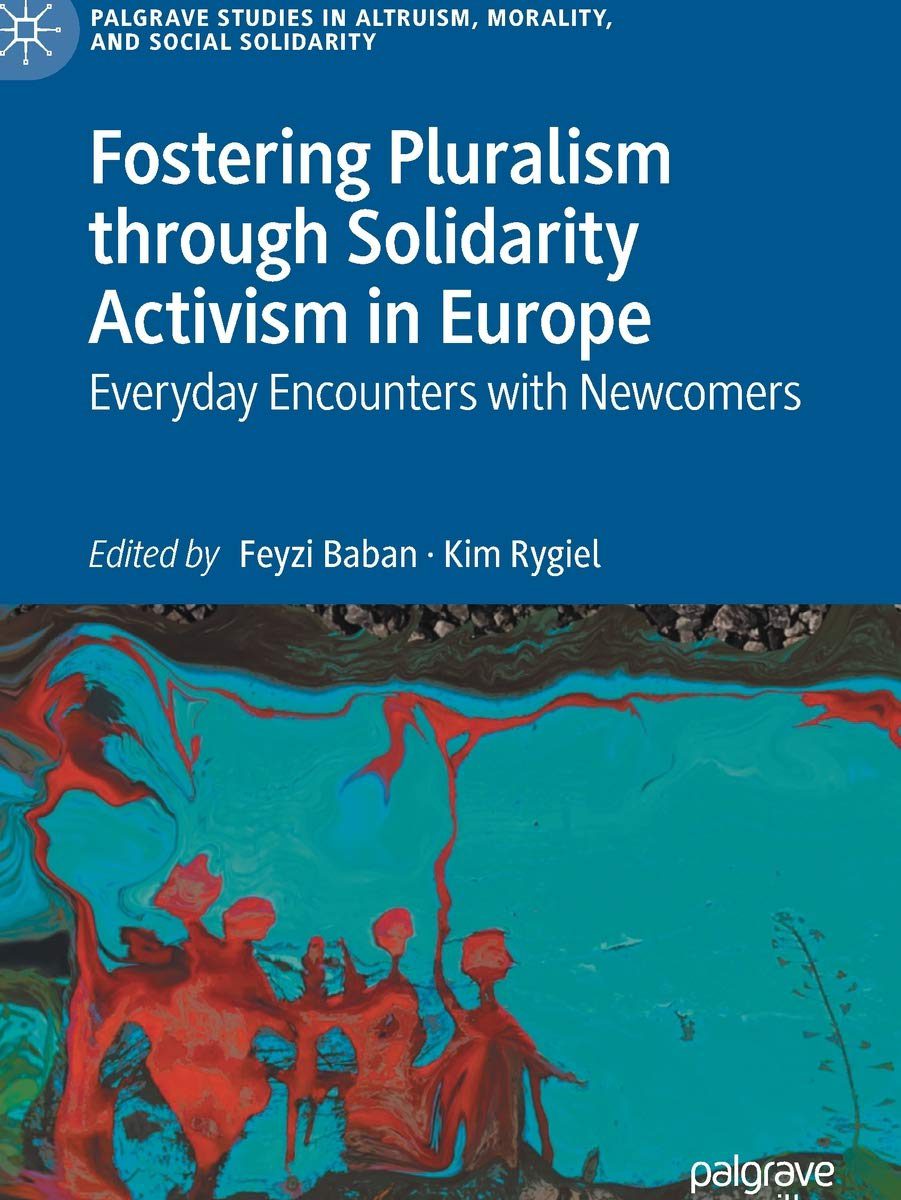 Editors Feyzi Baban  and Kim Rygiel bring together academics, artists and members of civil society organizations in a collection titled Fostering Pluralism through Solidarity Activism in Europe: Everyday Encounters with Newcomers (Palgrave Macmillan. 2020) to engage in a discussion about the ideas of living with others, through concepts such as cosmopolitanism, solidarity, and conviviality, and the practices of doing so.

In recent years, right wing and populist movements have emerged and strengthened across Europe and North America, rejecting the value of cultural, ethnic and religious plurality. Governments in Europe and North America are weakening their commitment to the international refugee regime, erecting new barriers to entry. Even as governments fail to accommodate growing pluralism, however, civil society initiatives have emerged with the aim of welcoming newcomers, such as migrants and refugees, and finding alternative ways of living together in diverse societies. Motivated by a desire to show solidarity, these initiatives demonstrate enormous creativity in fostering pluralism in an environment that has largely become hostile to the arrival of newcomers.

The contributions gathered here seek to explore such initiatives and the important work that they do in fostering ways of living together with others from diverse cultural and religious backgrounds. In focusing conceptually and empirically on discussions and examples of civil society initiatives, this book interrogates why, how and under what circumstances are some communities more welcoming than others.

The Politics and Art of Solidarity: The Case of Trampoline House in Copenhagen Birte Siim, Susi Meret Pages 31-58

The Unintended Effects of Conviviality: How Welcome Initiatives in Germany Push Back Hostility Toward Refugees Ulrike Hamann Pages 59-80 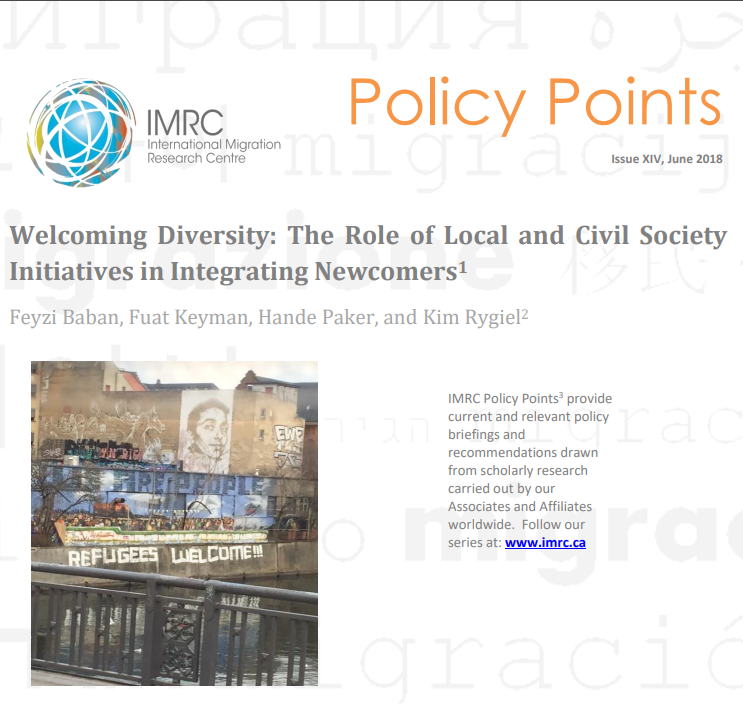 
One of the most important roles that the arts can play in this world is to inspire marginalized individuals and groups to express themselves in the public sphere. And it’s that idea that is at the heart of a new report just released by The Istanbul Foundation for Culture and Arts, titled ‘Living Together: Fostering Cultural Pluralism through the Arts’.

To speak about the transformative power culture and the arts can have on society, Showcase joined by Feyzi Baban, the co-author of the Living Together report.

We need to identify the wearing of the headscarf as a specific ‘act of citizenship’ that challenges dominant citizenship practices.


Although in recent years there has been a relaxing attitude in Turkey towards wearing headscarf in the public sphere, the controversy surrounding the visibility and use of the headscarf has often been read through modernity/tradition dichotomy which sees the use of headscarf by women as a threat to modernity by religious subjectivities. The principal reason for this reading is that the citizenship regime in Turkey has not been simply about defining a framework of membership to a political community but rather has been used to construct modern subjectivity.

Syrians are not only making claims to citizenship rights but they are also negotiating their access to social services, humanitarian assistance, and employment in different ways.

This article addresses the question of how to understand the relation among precarity, differential inclusion, and citizenship status with regard to Syrian refugees in Turkey. Turkey has become host to over 2.7 million Syrian refugees who live in government-run refugee camps and urban centres. Drawing on critical citizenship and migration studies literature, the paper emphasizes the Turkish government’s central legal and policy frameworks that provide Syrians with some citizenship rights while simultaneously regulating their status and situating them in a position of limbo.

Syrians are not only making claims to citizenship rights but they are also negotiating their access to social services, humanitarian assistance, and employment in different ways. The analysis stresses that Syrian refugees in Turkey continue to be part of the multiple pathways to precarity, differential inclusion, and negotiated citizenship rights.

Can we think about camps as spaces of politics and citizenship-making?

The proliferation of migrant and refugee camps for governing populations challenges the contemporary politics of citizenship. This article explores the camp as a question of citizenship. How do camp spaces enable the reproduction of certain spaces as the proper sites of politics and the constitution of some subjects and not others as the proper political subjects of citizenship? Can we think about camps as spaces of politics and citizenship-making? Situating the camp within the context of the historical emergence of extraterritoriality in relation to citizenship, I argue that camps reproduce orientalist mappings of the world that deem some people incapable or unworthy of citizenship. Rather than a space of exceptionality, outside of and separate from the space of the citizen, the article investigates the camp as both a political and politicized space, in which artists, activists and migrants use the camp as a site of building de-orientalizing cartographies to politicize migrant rights and political subjectivities.

Rygiel, K with Ilker Ataç, Anna Köster-Eiserfunke and Helge Schwiertz, Governing through Citizenship and Citizenship from Below. An Interview with Kim Rygiel, in: Movements. Journal für kritische Migrations- und Grenzregimeforschung 2015 1 (2).


Investigating migrant struggles as acts of citizenship serves not only to reframe non-citizen migrants as political subjects but also to unsettle the privileged identity of citizens.


This interview reviews some reflections from Kim Rygiel’s work on theorizing the struggles of migrants at the borders of Europe from a politics of citizenship perspective as forms of citizenship from below. The study of border controls reveals how restrictions on migrants’ mobility generates new forms of inequality and exclusion, but also social responses, and in particular, an emerging and growing activism of politicized groups of non-citizen migrants and citizens working alongside them in solidarity for migrants’ rights.

Investigating border controls thus requires investigating multiple practices and sites of bordering, but it also raises questions about the nature of the border and how to study it. The concept of bordering solidarities highlights for her that as much as border controls are restrictive and divisive, borders also paradoxically act as bridges or moments around which people on either sides of the borders, non-citizen migrants along with citizens, come together in solidarity and support for migrants’ rights.

This special issue inquires into their transformative possibilities and offers a collection of articles that explore political mobilizations in several countries and (border) regions, including Brazil, Mexico, the United States, Austria, Germany, Greece, Turkey and ‘the Mediterranean.’

Throughout the world, political mobilizations by refugees, irregularized migrants, and solidarity activists have emerged, demanding and enacting the right to move and to stay, struggling for citizenship and human rights, and protesting the violence and deadliness of contemporary border regimes. These struggles regularly traverse the local and constitute trans-border, trans-categorical, and in fact, social movements.

This issue brings into dialog social movement literature, and especially the ‘contentious politics’ perspective, with migration struggles. It connects these to current debates underway within Critical Citizenship Studies and the Autonomy of Migration literatures around rights making, the constitution of political subjectivities, and re-defining notions of the political and political community.

Migrants and refugees continue to die as they attempt to cross into Europe. This article explores the issue of ‘dying to live’ to draw attention to the disturbing fact of these deaths in relation to the state, biopolitics, and citizenship, but also to the growing mobilization around refugee and migrant deaths along European borders. The article examines transnational activism in solidarity with migrants, refugees and their families in response to deaths at Europe’s borders as one example of the many political struggles for greater rights undertaken by refugees, migrants, and solidarity activists emerging across Europe and elsewhere. An examination of struggles around rights of the dead and in response to migrant and refugee deaths suggests that they can be transgressive of the logic of modern citizenship.